skip to main | skip to sidebar

From the January 2017 course, Tomasz Frymorgen won a three-month contract as a features writer for BBC3, with Ellie Pringle working as a reporter for the Norwich Evening News. Sophie Morris was interning for The Times while freelancing for Sky News, and Andy Datson joined the Valley News group in south Wiltshire as assistant editor.

Of those taking part in the August 2017 course, Charlie Mitchell joined the National in Abu Dhabi as a leader writer, Jenny Sterne got a job working for Core Politics, Cameron Charters started work for Court News UK, Jess Sheldon started work as a showbusiness reporter for the Daily Express and Will Brown moved to Senegal as a stringer covering West Africa for the Economist. April Roach joined the Ilford Recorder as a news reporter, Charles Capel started work as a business news intern with CNN, Katie Heslop was appointed a trainee with the Saffron Walden Reporter and Dunmow Broadcast and Sarra Gray joined SWNS as a features writer. Amy Gibbons joined the East Anglian Daily Times and Ipswich Star as a news reporter, while Conor Matchett landed a job in the Eastern Daily Press's Lowestoft office.

Of those on the part-time course, Leigh Boobyer moved from the Express to become a local democracy reporter for Gloucestershire Live.

Gus Carter from the January 2018 started working full time for Guy Toyn of the Court News Service after the course. Of those on the 2017-18 part-time course, Coran Elliott started working for the Telegraph's Breaking News team, Elena Losavio and Gabriella Geisinger were working for the Express, Mathilde Frot was taken on by Newsquest London as a trainee reporter, Jennifer Sanin joined a financial trade magazine and Isabelle Kirk joined the Press Association RADAR team.
Posted by Andrew Knight at 10:37 No comments: 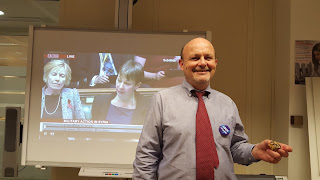 Of those finishing the course in December 2015, Sian Elvin was joining the Kent & Sussex Courier in Tunbridge Wells, Jenny Dale the Essex Chronicle and Anne Suslak the Welwyn Hatfield Times.

Of those finishing the course in May 2016, Catherine Wyatt and Pete Cary were joining the Press Association trainee scheme, with Helen Whitehouse going to the Mirror, Helen Cahill to City AM and Charlie Haynes to the BBC. Clara Strunck joined the Daily Star as online video news reporter, with Michael Drummond joining Sussex Newspapers as a reporter and Alex Marshall working for Caters news agency.

Of those finishing the course in December 2016, Cydney Yeates took up a job as online TV reporter for the Daily Star, with Azadeh Moshiri commencing an extended paid internship with CNN and Tom Baker starting work as a reporter for Legal Business. Unzela Khan was taken on as a reporter for Get Surrey and Sophia McBride took up a job working for the European Parliament's internal online magazine.
Posted by Andrew Knight at 02:36 No comments: 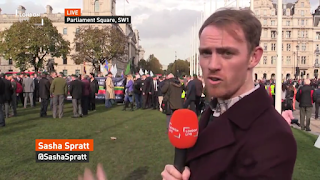 Of those embarking on the January course, Kristina Drake was offered a job as a trainee on the Echo in Southend and Alex Peace was due to start work for Estates Gazette. Olawale Kuponipe and Sally Wardle were offered traineeships with the Press Association and Laura Dennison a job with Snap.PA, a Press Association service specialising in lifestyle stories and social networking trends, while Catherine Murray became managing editor at Netmums and Madeline Ratcliffe joined City AM as a news reporter. Chris Flanagan joined the Welwyn Hatfield Times as a trainee reporter and Sasha Spratt (above) joined London Live as a production journalist.
Posted by Andrew Knight at 11:10 No comments: 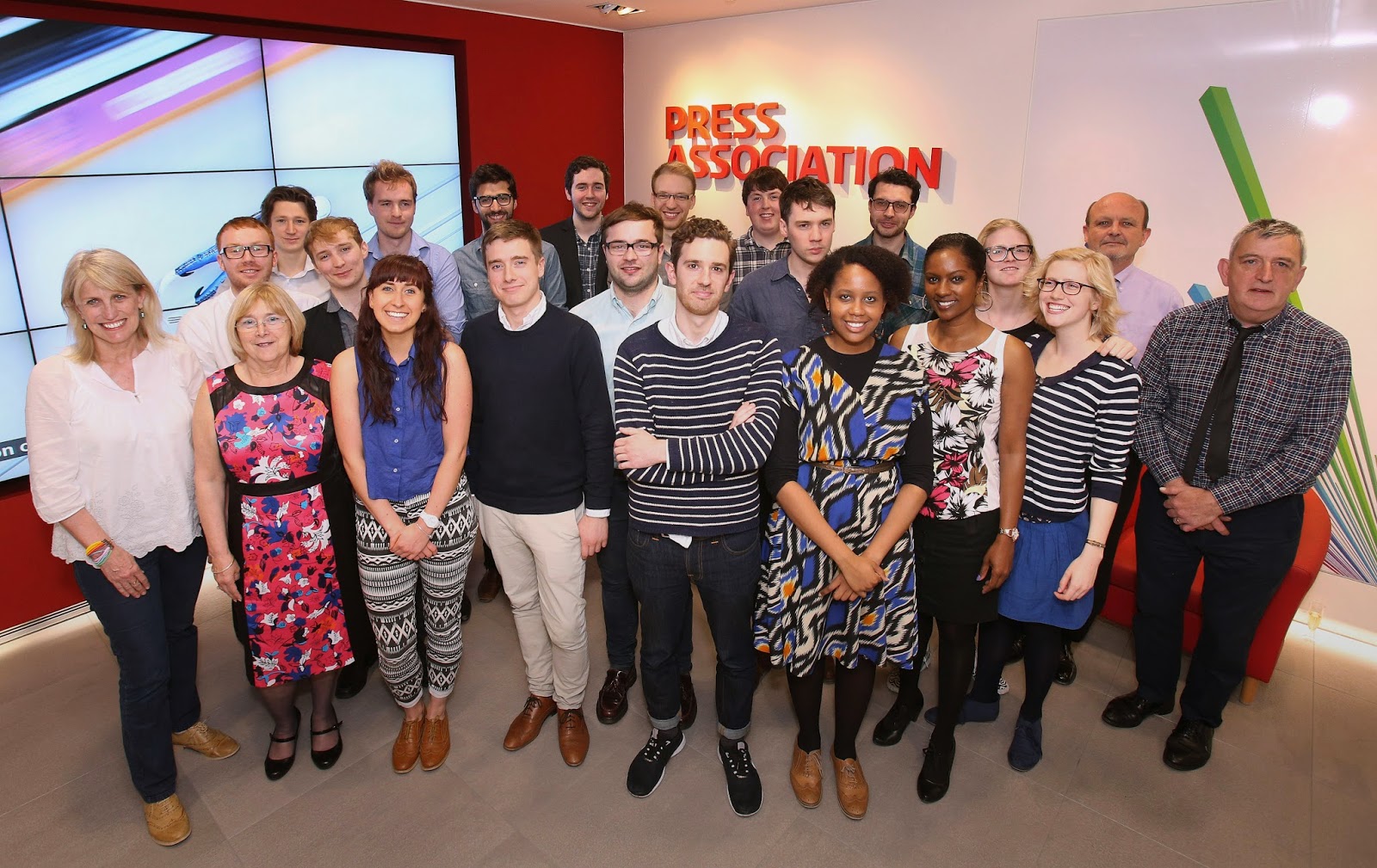 Last day at PA for the January class... James Caven has since joined the Times series in Barnet. Of the September course, Hannah Somerville joined the Oxford Mail as a reporter, with Sam Balls heading to the Essex Chronicle.
Posted by Andrew Knight at 10:25 No comments: 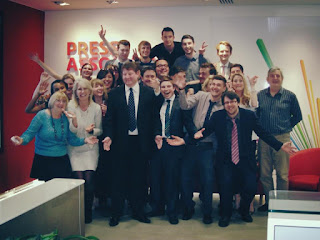 Of the Press Association students finishing their course in May, Andrew Liddle was offered a job with the Dundee Courier and Charlotte Krol with the Oxford Mail, with Amelia Latham-Wake taking up a post in legal publishing, Olivia Rzadkiewicz returning to the Telegraph and Joe Sturdy joining the Essex Chronicle. Georgia Arlott was hired by the Coventry Evening Telegraph and Jake Bambrough by the Kent and Sussex Courier before moving to Qatar in 2014 to work for a sports science journal. In 2014 Georgia moved to ITV and Charlotte to the video desk of the Telegraph. Georgia has since moved to Sky. 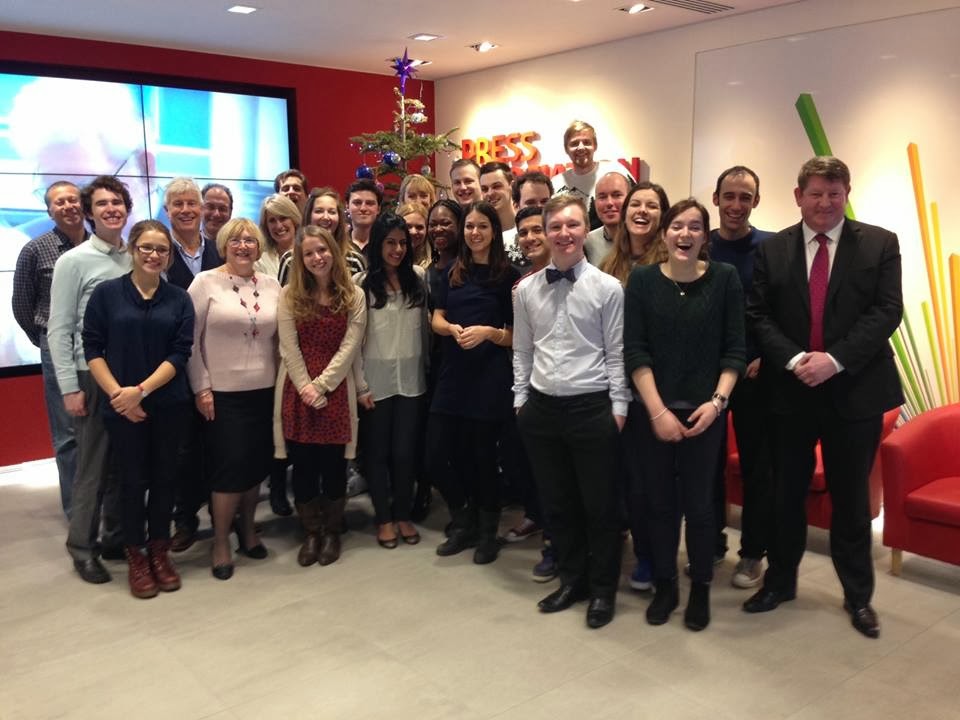 Of those finishing in December, Haseeb Malik joined the Grimsby Telegraph, with Matt Oliver going to the Oxford Mail and Alexandra Grainger to the Maldon and Burnham Standard. Tom Wadlow joined the WDM group as a staff writer, based in Norwich, while Eleanor Davis joined the Surrey Herald and Mark Edwards was hired by the Surrey Advertiser, working on the Dorking and Leatherhead edition. Fran Ivens joined Legal Week as a reporter after completing a paid internship at the Sunday Times.
Posted by Andrew Knight at 13:58 No comments:

2013: Of the fast-track students finishing in February, Henry Willis gained a staff job working for specialist VW magazines produced by IPC/Time Warner, and edited by James Peene (LSJ, 2004). Later in the year he moved to Auto Express.

2012: Of the fast-track students finishing in February, Lewis Huxley gained a six-month paid internship with Presse Media 81 in the south of France, Libby Powell jetted off to Bangkok to report on a major conference for an NGO and Nathalie Tidman got a job in London working on a magazine focusing on renewable energy. Chrissie Daniels landed a job as a trainee reporter for Archant, based in Ashford and working across Kent on Sunday media titles.

Of the one-year class finishing in July, Liz Hughes gained an internship on a travel website and Kayleigh Lewis joined The Parliament magazine in Brussels.
Posted by Andrew Knight at 16:51 No comments:

Of those students finishing the PA course in December 2012, Liv Lee and Hannah Ellis-Petersen were continuing their training with the Daily Mail, Nazma Chowdhury was returning to the BBC in Bristol and Amna Bagadi was offered a position with Al-Jazeera, working for both the English and Arabic channels. Patrick Daly was offered a job on the Plymouth Herald, Lucy Golding joined the Maidenhead Advertiser and Rachael Hook and Megan Tatum were hired by the Essex Chronicle series. Sophie Inge was offered a job with a new online project based in Stockholm, Oliver Haenlein joined a food magazine in Camden and Anna Verdon was offered a position with the women's magazine More.

Sophie later returned to London to work for the Islington Gazette and in 2015 Patrick was appointed parliamentary correspondent for a trio of regional titles in Bristol, Grimsby and Hull.

Of those students finishing the PA course in May 2012, Annabel Howard was offered a job at the Maidenhead Advertiser before moving on to the Herald in Northampton and Georgie Keate was starting an internship with politics.co.uk. Steve Richardson gained a position with a sports production company.

Of those students completing the course in December 2011, Alex Gregg was offered a reporting position with the Reading Chronicle, with Sarah Hayes starting work in Epping, Jo-Anne Rowney moving to the Beaconsfield Advertiser and Janine Rasiah to the Henley Standard. Miranda Knox was offered a features writing position with Caters news agency. In 2013 Janine won the national Esso award for her performance in the NCTJ final exams when she qualified as a senior reporter, while Miranda moved to Love It magazine, where she became acting features editor in 2014.

Emma Lake landed a job in Bury St Edmunds and Lauren Fruen with the Kent Messenger group in Whitstable. Anna Dubois and Jamie Rose were working shifts at PA, Nicki Slater at The Times Online and Dan Morgan with the Daily Mail. Amanda Nunn gained a position with the Ilford Recorder.

Students who successfully completed the PA NCTJ course in Victoria in June 2011:

Of the February course, Tallulah was offered a features writing job with South West News in Bristol, while Georgina and Tanya joined the Essex Chronicle and Luke landed a job at The Sun. Monica joined Northcliffe Media's south-east network, based in Dorking, with Lima and Hannah Bewley taking up posts with Trinity Mirror titles in Hounslow and Uxbridge. Hannah Collisson went to the Hastings Observer, Amy Jones has been freelancing as a features writer for The Sun and Mike Fryar was appointed by Adfero to take over its new motoring department of seven websites. Joey Severn joined the Derby Evening Telegraph as a trainee reporter.

After the December course, Jenny started work at the Cambridge Evening News, Alex at PA in London, James at the Essex Chronicle in Chelmsford and Virginia at Masons News Service in Cambridge. where she later moved on to become news editor. Sam was offered a job on Northcliffe's Sevenoaks Chronicle and Poppy on the Greenford and Northolt Gazette, while Kayleigh joined the Congleton Chronicle in Cheshire and Jack landed a job at the Northants Evening Telegraph. Zab has been working in the Palestinian territories, freelancing for AfP, and Harriet also worked in Palestine for a media organisation for a couple of months before returning to the UK as a production assistant with a film company. Tom has been working as a sports freelance for clients like Eurosport and Football365, while John began freelance reporting shifts at The Times after a work experience placement there.
Posted by Andrew Knight at 11:12 No comments: